Capoeira Brazilian Pelourinho (CBP) is a Capoeira martial arts center located in Orlando, Florida. CBP was founded by Capoeira Mestre (Master) Lazaro Santos in 1995. CBP is an active member of the Central Florida community working with numerous children’s and cultural organizations (including Disney, Universal, Give Kids the World, Orange County Public Schools, Relay for Life, and many more) to promote this healthy and enriching martial art to people of all ages.

To learn more about our academy, watch our academy walk-through video! 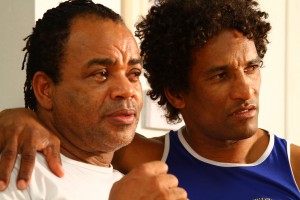 Mestre Lazaro was born in Bahia, Brazil and has developed a unique style of teaching Capoeira forged through his experiences and dedication to the martial art. As many Capoeristas (Capoeira practitioners) in Bahia, Mestre Lazaro started his training at an early age. His Mestre, Grande Mestre Dinho of Grupo Internacional de Capoeira Topazio, passed down generations of knowledge to Mestre Lazaro throughout their years together. He persevered as a student and eventually graduated as a Mestre of Capoeira. He then found himself experiencing years of world travel throughout Europe, Japan, and the USA, which allowed him to demonstrate Capoeira to a larger audience. This led Mestre Lazaro to Central Florida, where he founded his own Capoeira academy in Orlando where he continues to teach and practice Capoeira. 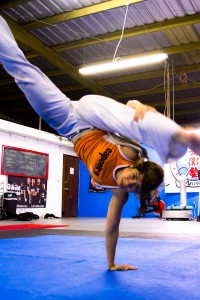 Paraiba was born in New York City and moved to Orlando in 1994. She is currently perusing a career in medicine and has always been fascinated with martial arts. She was introduced to the art of Capoeira while on a trip to San Francisco, but did not know anyone who taught where she lived. While in college, she encountered a pair of Capoeiristas who introduced her to Mestre Lazaro. Since then, Capoeira has been a major part of her life. When asked how she feels about Capoeira, she explains that it has changed her life, made her a better person, increased her ability to focus, and helped her kick bad habits. 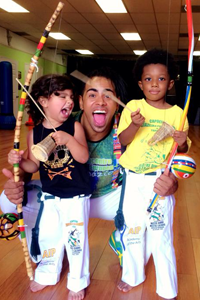 Wellington Lima, also known as Palhaçada, has been doing Capoeira for over 25 years, in his hometown Recife, Pernambuco. When Wellington told his parents what he was doing, they yelled and criticized him because at the time, Capoeira was still considered a pastime for thugs. Against his parents’ will, Wellington continued playing Capoeira and although disobeyed their wishes, he felt that he could justify his actions because Capoeira gave him an outlet for positive influence and expressing himself. Not so long after starting Capoeira he joined Gymnastics, where he participated in many regional competitions. A few years later, he discovered trampolines, a sport in which he felt “close to the sky,” and showed great ability and prowess in his jumping. At the age of 17 he won the Brazilian national championships. In 1998 he begin to work for Cirque Du Soleil (La Nouba In Orlando FL) as an acrobat character. That same year he met Mestre Lazaro. Wellington was very motivated by his positive teaching style. In 2005, he joined the traveling show Dralion and over the span of 5 years, he traveled to more than 20 countries performing. In addition, he was visiting, teaching and playing Capoeira with various groups. In 2009, he moved to Las Vegas to perform in the show “Viva Elvis” and then three years later he now performs at “Michael Jackson One”, at Mandalay Bay Hotel. Through his experience and dedication to the art of Capoeira Professor Palhaçada, enjoys encouraging people to develop an awareness of their body and mind. Although there are traditional ways of playing Capoeira, Professor Palhaçada believes that this is an art of spontaneity and any individual can use it to discover new levels of capability and self-awareness. You can visit Professor Palhacada’s academy in Las Vegas by clicking HERE. 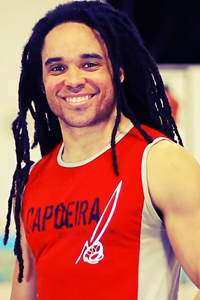 As one of Mestre Lazaro’s first students, Craig Ellis Raboteau “Scooby Doo” began practicing Capoeira in 1995. He found himself hooked on Capoeira from his first class. Through many years of trial, attempt, improvement, and achievement, Scooby has realized that Capoeira is not just something he does; it’s part of who he is. At only 14 years old, he learned to think more and fight less. Since then, Capoeira has trickled into every aspect of his life. In art, in “war,” and philosophy, Capoeira and the teachings of Mestre Lazaro have shaped him into a man that he believes his mother would be proud of. Through Capoeira, he has grown in confidence and has been given the opportunity to travel the world.