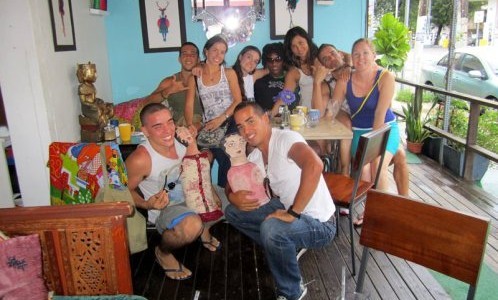 The summer flew by and the school year is back in full swing! We have our CBP After School program in full effect. We are currently picking up from schools in the Dr. Phillips area, Metro West, as well as some down John Young Pkwy. We still have spots open in the van as well as additional schools to add to the route! So give us a shout if you are interested!

School may have been out but the kids were still working hard! Our CBP Kids Demo Team worked together to put on an amazing show at Disney! They worked many days each week throughout the whole summer and did a fantastic job! They all should very proud of themselves, I know we are!

The adults made it out to Disney too, performing at a few different privately hosted conventions.

Then in the middle of July, some of us said “enough is enough…we need a vacation!” 11 of us from the adult class caught the next flight to Puerto Rico and said hasta luego Orlando! It turned out to be a short, but never the less awesome, weekend getaway with some awesome people! CBP loves Puerto Rico!

CBP Summer Camp hosted its own Summer Olympic Games! From the most amount of jumping jacks in 30 seconds, to handstand contests, and everything in between. The kids were all Gold medalists for sure! We also took some field trips with the summer camp and Downtown Disney was for sure one of them!

We made it out to Zellwood, FL to teach a two part work shop at a summer camp full of amazing kids full of energy to learn some Capoeira!

The adults have been working hard! Lots training and sweat…maybe they are preparing for something, perhaps the Batizado?

So as the summer ends and school begins you know what that means…Batizado time!

mjsobotik
23:05 23 Oct 18
Kids have been participating in the After School program for 3 months and they love it! They have learned so much, even some portuguese! The staff and the teachers are very good! All the excercise does them well and they learn to follow instructions and to believe in themselves.

Jair Herrera
17:14 04 Oct 18
3 months ago I embarked on a new journey in my life. Since I was 6 years old I’ve enjoyed watching martial arts, specifically when I saw a movie called Only The Strong. This was a movie based on Capoeira, a Brazilian martial art, and what amazing things the art can do to people’s lives. Since then, I always wanted to learn it but it was either too far or too expensive when I lived in New York. Still being very interested in martial arts, I did Karate when I was very young and then ended up in Muay Thai in my early 20s. I studied Muay Thai for 6 years and loved every minute of it to the point where 5 very close friends and I took a trip to Thailand a few years ago to witness the art LIVE and train out there! We even got traditional Sank Yant tattoos while we were there and that was in experience within itself. I then ended up moving to Florida a few months ago for work. At first I felt very lonely seeing that I moved here alone and all my immediate family stayed back in New York. For anyone that ever moves away from where they were raised, the first month alone is the HARDEST! One day after work I was flipping through channels trying to find something interesting to watch and there it was...ONLY THE STRONG was on T.V. I sat there like a little kid watching cartoons. When it was over I thought to myself, “let me see if Capoeira is out here”. I look mee up a few schools and found one VERY close to my apartment! I sent an email about my interest and got an immediate response and taking a trial class by Gine the office manager. I was a little nervous to go because it was new and I hadn’t done martial arts for a bit so I was rather out of shape but I went for it. Everyone was very welcoming and happy to see a new person join. I was greeted by each student and they all told me their Capoeira nicknames instead of their real names. Apparently it was part of the culture of Capoeira. When we started the class I felt like I was going to pass out. I could BARELY keep up with the basics, let alone do all those difficult movements. After the class I went home and couldn’t move properly from the immediate soreness I felt and it was ever worse the next day but that didn’t stop me. I kept going everyday, 5 days a week. I was in pain, sore, tired, frustrated because I couldn’t do the movements and impatient. I kept training, kept trying and the best part was that everyone was very supportive each and everyday. I made a new best friend, found a new family, learned an amazing art and Capoeira has changed my entire prospective on life. This passed Sunday I had my Capoeira test for this years graduation. At first I was extremely nervous when I was told that I had to test this year know that I had just started. But it motivated me to work twice as hard. I practiced at home, in my office while at work and stayed late after class to do drills. I PASSED MY TEST! I have new found confidence in me that I just can’t explain. I learn the required movements, the names of the movements in Portugués, history and even learned to play a few of the instruments involved in Capoeira. In two days, I have my Capoeira graduation, also known at a Batizado. Now when I first started I was significantly larger in body mass. I dieted, went through pain and worked very hard for this coming Saturday. I had ordered my uniform for this in a specific size and I promised myself that I would work as hard as I had to so I could fit in it and as of this morning, IT FITS! On Saturday I will need to demonstrate to my academy and various other Capoeira academies from around the world and the most respected Mestre’s, Capoeira masters, from Brazil and other places that I deserve to be part of this culture and earn my first cord so I can be known as a statused Capoeirista in this world. I cannot express how excited I am! I will continue on this path for the rest of my life! I’m getting to live the Dream I’ve had since I was 6 years old and I wouldn’t have it any other way! Shout to my academy! Capoeira Brazilian Pelourhino! CBP!

Michelle Arroyo
02:34 02 Oct 18
I can't say enough about this place. This is my family. I have seen kids grow into teens. I gave Seen new babies be born. My child volunteered as a camp counselor over the summer and she loved to be there. She has also been a student for the past 4 years. This place is a great experience for all kids. It is good to keep kids active and teach them social skills. It is great exercise for adults and they are not as expensive in comparison to other places that offer martial arts. They also run sales often for trial memberships on their website.

Gloriann Tavares
20:24 23 Sep 18
CBP is an amazing family place. We are greatful for this Capoeira family. Our son has been with CBP for almost 4 years.
See All Reviews