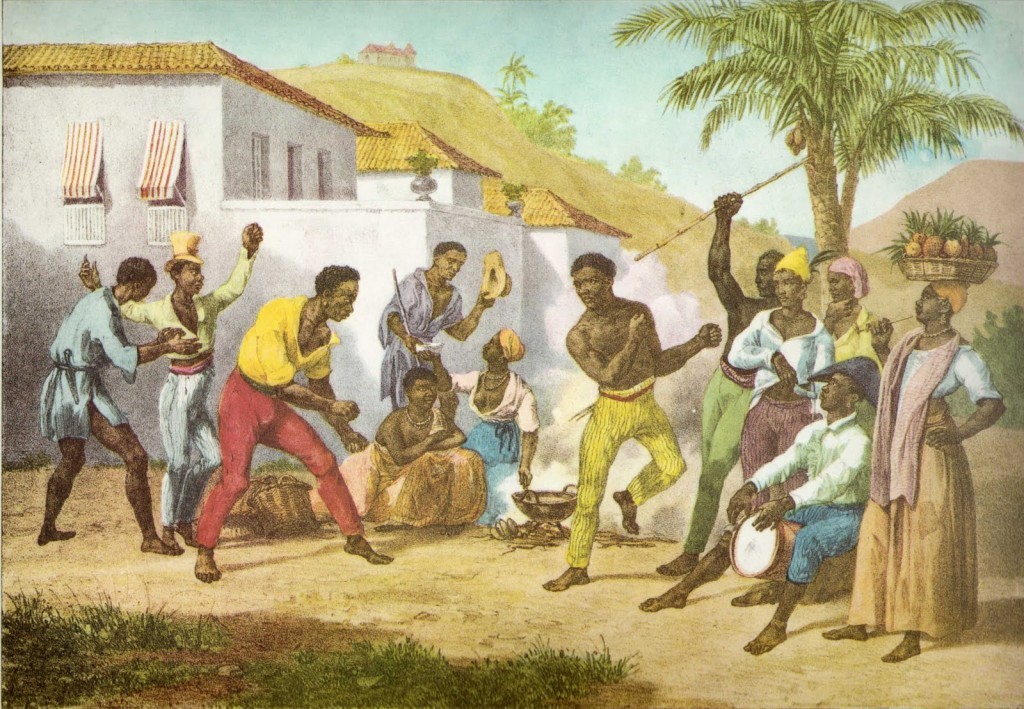 Capoeira is an Afro-Brazilian martial art. It was created by the African people who where capture by the Portuguese and brought to Brazil to be slaves in the 1500s.

The slaves were put to work in the field to harvest sugarcane. These slaves created the earliest form of Capoeira to increase their chances of liberty and independence.   They disguised the martial art and fighting techniques as a folk dance and when the slave masters were not looking they would practice the self-defense aspect. When the slaves escaped, they fled to small villages which they formed called Quilombos. Quilombos dos Palmares was the most famous of the Quilombos, which was lead by Zumbi.

On May 13th 1888 slavery was abolished in Brazil. The Brazilian government feared the ex-slaves would join force and use capoeira to revolt against the government therefore, a ban was put on Capoeira and anyone known practicing Capoeira would be send to jail.

To keep the tradition of Capoeira alive it need to be practiced secretly and disguised as a folk dance. In their hidden places, they did their best to keep the tradition alive and by presenting it as a folk art it became more accepted by society. Capoeiristas were known only by their nicknames, which made it more difficult for the police to identify and arrest them since their real identities were unknown.

Music is a very important element and it help kept the practice of Capoeira alive. There are instruments such as the pandiero, atabaque, agogo and the most important instrument; the berimbau.

There are two very important Capoeira masters we pay tribute to. Mestre Pastinha and Mestre Bimba. Mestre Pastinha, whose real name is Vincente Ferreira, is known as the father of Capoeira Angola and for preserving that style.

The other very important Capoeira Mestre is Mestre Bimba. His real name is Manuel dos Reis Machado. He was the one who developed Capoeira. He is the father of the Capoeira style called “Regional” which is that type of Capoeira we do at here CBP.

The ban against Capoeira was finally lifted; Mestre Bimba opened is academy in 1932 but it wasn’t until 1936 was it officially recognized by the Brazilian government when he was invited by the government to perform Capoeira for the president. Today Capoeira is practiced all over the world and it is the 2nd national sport in Brazil!

Colors of the Brazilian flag represent:

Parts of the Berimbau